Who is Russ Dizdar? Well, it's best if I tell you how I knew about him, rather than cut and paste some obituary. Which, I will actually do at the end, to be official. When Rob died I said aloud, "there will be three of us to go soon."

First, he died like Rob Skiba, who -like myself- were ardent anti Mark of the Beast Vax Weapon folks and were not shy about letting the world know it.

I came across Dizdar, seems like 15 years ago, back in the early 2000s. His brand of evangelism didn't sit too well with me, but the core of his ministry hit home dead on. He understood the enemy; that it was a spiritual battle on the dimensional level, that demons do exist and muck about with our reality and people constantly, and that these things had to be dealt with in EVERY person's life.

I liked his style, because by that time, I was already dealing with precisely that in a full time way. What with gifting, planting bibles, clearing satanic sites, even back then. Especially then.

Yeah, he had a bit of churchianity about him but like each of us, how we come to our spiritual awareness and beingness is unique to each of us. This was so with him; I knew that, even then. This allows us to refrain from harsh and unwarranted judgment about a soul just because they don't think exactly as we do. The pinnacle of a dunsky idiot.

Who wants to be that guy? The judgmental idgit? Keep it.

I have an old directory of some of his written work; time to go through that all again.

Russ was also a doer. He did field work, another thing that even now, brings a smile. You have to get out of the office, as it were, and hit the bricks. Theoretical anything is just a wasted life.

Go be, do, know, love, serve. In the field. Not just at the typewriter or keyboard.

It's sad to me, when fellow laborers leave the field of battle, their course run, their labors finished. Their light is such that the earth diminishes with each passing.

Because they have left a family in bereavement I will proclaim no analysis of their deaths. Their close friends and family are suffering enough right now. They don't need Donnie putting out blather regarding that.

As with Rob, I've been dealing with this privately, not even sharing among intimates. When the apostles back in the day started dying off in much the same way, surely those still alive were feeling what I've been feeling; as have many of you all, too.

May Yeshua's blessing be upon these men of Good, of High Estate, in their endless zeal and love for Our Father and His Son, Yeshua.

Bless you, brothers. Bless You.

Postscript. As always, since forever, to get the correct verse needed, I closed my eyes, opened the Bible and wherever my finger lands, is what you all get on these pages. This is what He led me to this moment.

17All this is come upon us; yet have we not forgotten thee, neither have we dealt falsely in thy covenant.

18Our heart is not turned back, neither have our steps declined from thy way;

19Though thou hast sore broken us in the place of dragons, and covered us with the shadow of death.

20If we have forgotten the name of Yahuah, or stretched out our hands to a strange god;

21Shall not Yahuah search this out? for he knoweth the secrets of the heart.

22Yea, for thy sake are we killed all the day long; we are counted as sheep for the slaughter. 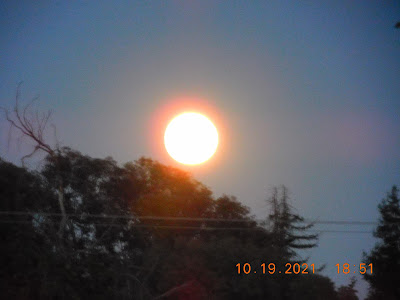 Who was Russ Dizdar?

He was best known for his spiritual knowledge. He was a paster as a profession and he served numerous years of his life to this. He started his passion by first serving to the APF church as Pastor. He was the best counselor for the people. And they use to be beloved in him and he earned great respect from the followers him. Even people also consider him as the man of God. He also writes a book including Spiritual Warfare, The Black Awakening, and Shatters The Darkness. He even shared much of his knowledge through his interviews.

Posted by Juicing and Raw Foods Sunboy at 10:30 AM
Email ThisBlogThis!Share to TwitterShare to FacebookShare to Pinterest
Labels: 2021 - The year of the Damned, Psalm 44 22, rob skiba, Russ Dizdar died Oct 18

Posted by Juicing and Raw Foods Sunboy at 9:05 PM
Email ThisBlogThis!Share to TwitterShare to FacebookShare to Pinterest
Labels: 2021 - The year of the Damned
Older Posts Home
Subscribe to: Posts (Atom)