The Angel that is also a Star...in the firmament 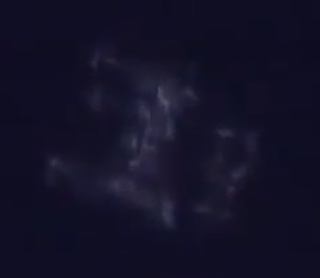 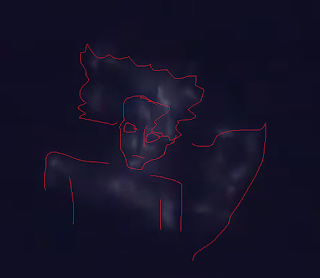 
This is what you get when you get a really good zoom on a camera or a telescope, or both. The twinkling star reveals a humanoid appearing light being. Most shots reveal the angel itself, either in form - as it is here in example - or while changing into other temporary shapes for purposes we can, at this time, merely speculate upon.

After having gone through several dozen of these shots that I and others have taken with our equipment, there is zero chance that these are suns or gaseous nuclear furnaces or shiny planets. They are none. They are living light beings, enormous in size, and have a job to do.

I am putting together a display of sorts that will go through each of them and give what information is known, especially scriptural. Also, whatever else can be gleaned from interaction and observation.

As many longtime brothers and sisters are more than aware, I've been in the angel photographing and documenting field for over TWO decades. I've put up a great many photos and short films over the years. They're around, I take their picture.

I would like to early on, make a distinction between angel and any other kind of spirit. Earth trapped spirits are usually nephilim or fallen, but out of body. They are shadow walkers (sometimes) and I call them the "deceivers." Angels on the hand are the servants of Yeshua and YHVH. Period. Happily so. Many sing, if you can hear it.

I've been able to see both classes since I was quite young. And my  salvation and baptism at 16 made it only more so. Along with the discrimination to know the holy, good, and true from the damned and deceptive.

Angels are not to be worshiped. The are a class of creation, like us, like the animal kingdom and plant kingdom, that exists on Earth with but one purpose, to serve the Most High, Yahua. As such, they are brothers. And, in certain choirs, sisters.

Also, a warning. Some people cannot see them, regardless of HOW CLEAR the photography is. They are not meant to see them. For the rest, that we are clearly looking at a well formed light being is beyond question - all the parts that are like us (in the image of YHVH) - are there as well. Dad obviously has his reasons for this, beyond what we are meant to understand. At this time.

It goes without saying that this puts the whole "millions of light years away" fiction of the globe model of deception in its proper place. The trashcan. There are no globes, or planets, or suns all over some fictional galaxy (a term invented in the 1950s). There is only the visible truth in our time. And more and more of it is being released on a regular basis.

This is as it should be. Evil grows in the world to monumental proportions and so does the truth of Earth. We all live together on this plane, under Yahua (YHVH), and our salvation for this whole six thousand year mess is at hand for all who are called by the Father. He calls you to glory and you, with your freewill, can either accept the sacrifice of Yeshua or reject it out of hand.

Before anyone starts climbing up my dignity with pitchforks and torches for heresy and invoking demonic spirits (I can already hear the doubt attacks coming from Satan's useful idiots) REMEMBER...THESE ARE THE STARS IN THE SKY. You know, the one's above YOUR HEAD. they are not conjured or ritualed into existence. They have been up there for thousands of years, and are well cataloged. It is these fellows I am bringing into sharp relief. They stood well with YHVH in the old wars and are steadfast, loyal, and true. How many of us can say that honestly.

Some of us, sure. But all of us come short of glory.

Posted by Juicing and Raw Foods Sunboy at 6:22 PM
Email ThisBlogThis!Share to TwitterShare to FacebookShare to Pinterest
Labels: Angel that is also a Star...in the firmament, articles by Don Bradley, Meet Assanel
Older Posts Home
Subscribe to: Posts (Atom)