The Tribe of Manasseh - DUMBS in the days of Moses, Joshua, Caleb

The Blessings of the Tribe of Manasseh

"And he blessed them that day, saying, 'By you Israel shall pronounce blessing, saying "May God make you like Ephraim and Manasseh!" Thus he put Ephraim before Manasseh." 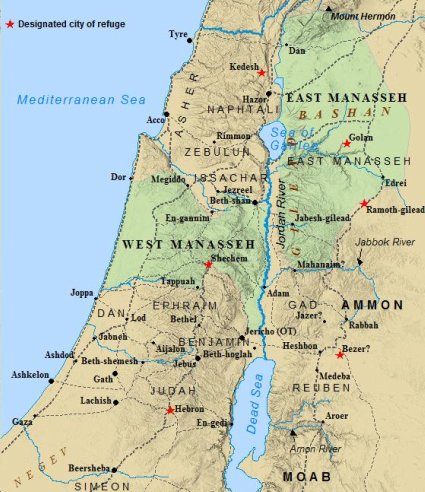 Hence it is necessary, when discussing the inheritance of the tribe of Manasseh, to think in terms of East Manasseh and West Manasseh. East and West may be used to denote each side throughout this article. According to Scripture, the first inheritance for the tribe of Manasseh was handed out east of the Jordan, to East Manasseh in the Transjordan. However, the heartland of the northern kingdom of Israel would be found west of the Jordan, in the tribal territory of West Manasseh.

The first allotment of land was given in the Transjordan by Moses himself. It was given to the tribes of Reuben , Gad , and East Manasseh as spoil of war. The Israelites had just defeated the Amorite/Rephaimite/ Nephilim ? brother kings of Og and Sihon. To the tribe of Manasseh in the east was given all of the former kingdom of King Og. This area was known as Bashan.

The allotment of East Manasseh's land is brief in Scripture. The Holman Bible Atlas points out the border description of East Manasseh is primarily construed from town lists. Though multiple passages exist in Scripture concerning the allotment of the eastern half-tribe of Manasseh, each is brief and somewhat vague, focusing on a different aspect of the land allotment. These passages can be found in Numbers 32:39-41, Deuteronomy 3:13-15, Joshua 13:29-31, and I Chronicles 2:21-23.

Numbers 32:39-41 describes the foundation of the eastern half-tribe of Manasseh.

Based on this passage, it would seem that Machir, the eldest son of Manasseh, drove out the Amorites from Gilead. Seemingly this would have occurred after the destruction of Og at Edrei, thus weakening all of Bashan. Machir, thus, dwelt in Gilead, as Moses granted to him the land he had cleansed. We see a similar situation with Caleb and Moses in Joshua 14. Jair and Kenath seemed to have settled in the land north of Gilead, called Bashan. 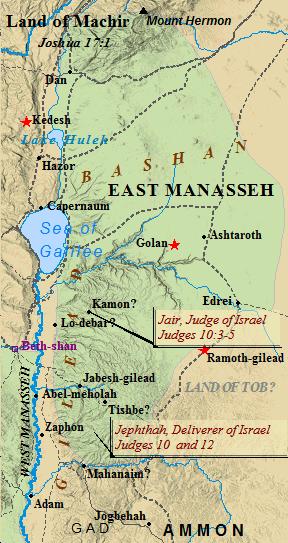 Scripture makes it plain the kingdom of Og was vast, including both the territory within Bashan and Gilead. The kings Og and Sihon had basically ruled the entire Transjordan. Now, Bashan was settled by the sons of Jair and Kenath, whilst Gilead was settled by the sons of Machir. This division is further seen in the description of the allotment found in Joshua 13:29-31.

The words of Moses clearly set forth the demarcation of land east of the Jordan in Deuteronomy 3:14-15.

"Jair the son of Manasseh took all the region of Argob as far as the border of the Geshurites and the Maacathites, and called it, that is, Bashan, after his own name, Havvoth-jair, as it is to this day. And to Machir I gave Gilead."

Jon Bright, in his book A History of Israel, claims the tribe of Manasseh may have been further broken into two distinct clans; those of Machir and Gilead. He states Deborah's verse in The Song of Deborah from Judges 5 as evidence of this. In this passage, Deborah praises the commanders "from Machir" which assisted Barak. Conversely, Gilead was chastised for "remaining across the Jordan". Thus, the two distinctions of Gilead and Machir within the tribe of Manasseh find themselves in some of Israel's earliest literature.

I Chronicles 2 lends further insight into the family of Machir. It becomes plain Machir was a great man. He was a great warrior, responsible for cleansing the land from the mighty Amorite. He was also the father of Gilead, from whom the region of land would take its name. Machir also had at least one daughter.

"Afterward, Hezron went in to the daughter of Machir the father of Gilead, whom he married when he was sixty years old; and she bore him Segub. And Segub became the father of Jair, who had twenty-three cities in the land of Gilead."

Thus Machir's daughter was given in marriage and produced another male, Segub, who grew to be a great man as well. It is interesting to take note of the family name, Jair being handed down to the next generation. Uncle Jair occupied the cities in Bashan, however, this Jair, the son of Hezron, from the daughter of Machir, chose to settle in Gilead. He ruled over twenty-three cities. The tribe of Manasseh in the east was primarily settled by the clans of Jair and Machir, or so Scripture seems to indicate. Gilead's descendants would rise to prominence as well.

These passages also make it clear the land of East Manasseh was further divided into two sub-sections, or, regions. These are known as Bashan and Gilead. Bashan, as Adams pointed out, "included all of the tableland south of Mount Hermon to the river Yarmuk". The western border of Bashan was the Jordan River and Sea of Galilee. The eastern border, for all practicality, ended at the ancient natural fortress of Edrei, and dissipated into the fringes of the imposing and majestic Arabian Desert.

Bashan was formed of hard limestone (Adams, 76), and volcanic deposits. Rainfall was significant, as Bashan received twenty to forty inches per year. Bashan rose sharply above the Jordan Rift Valley below, thus clouds formed in the higher altitudes of Bashan. Elevation in the Transjordan ranged from 2, 000 to 5, 000 feet above sea level. Frequent showers dropped on the hard limestone (Holman Bible Atlas, 23) as a result of its higher elevation.

Volcanic cones, long since inactive, frequently jut from the surface. The tableland gradually slopes in the east, merging with the Arabian Desert. The tribe of Manasseh seldom controlled Bashan after the United Monarchy. The Arameans, especially those in Damascus, oftentimes invaded Bashan and threatened the Israelites in the Transjordan.

Edrei was the fascinating capital of Og, and an ancient city formed of natural volcanic activity. It was an impregnable fortress of nature. Scholars point out the natural security of Edrei's volcanic formed walls. The city consists of clefts and crevices. Many of the ancient houses still stand, a result of the walls, ceilings and doors, for the most part, being completely made of stone. The city itself sat twenty feet above the plain; hence it was a naturally formed volcanic and rock fortress towering above the surrounding countryside.

The most fascinating element of this mysterious city, however, is the city built underground, beneath the imposing fortress towering above ground. Many feel it was hollowed out as a refuge for those living above, though this is not known for certain. The precise function of this underground city remains shrouded only in our time is understood as most perfectly similar to USAF DUMBS and large underground cities for harvesting children and living large out of the sun, to do what they will.

Perhaps it is no coincidence that Og and Sihon, the last of the Rephaim , also connected to the Nephilim, also shrouded in mystery, dwelt in such a fortified city with a mysterious underground city as well. It is quite remarkable, when viewed in this context, that the Israelites, led by the men of the tribe of Manasseh, defeated the mighty King Og. These were giants, fierce warriors. The Jews, likely, were much, much smaller people. Edrei was a mighty capital for a mighty king. God used the foolish, small, and insignificant of the earth to shame the mighty and proud.

The tribe of Manasseh in the south bordered the northern limits of the tribe of Gad. East Manasseh reached from its southern border, generally associated with the Yarmuk River, to the foot of Mount Herman, towering over 9, 000 feet high in the north. J. McKee Adams sheds light on the fact the Yarmuk is never mentioned in the Biblical narrative (Adams, Biblical Background 98). Scholars have noted this is strange, as the Yarmuk was one of four chief streams in the Transjordan.

Regardless, the tribe of Manasseh was well watered. The soil, consequently, is some of the richest in all of the Near East. From ancient times the land has attracted farmers and herdsmen. The prophets of Amos and Ezekiel refer to the well-fed cattle occupying Bashan in Old Testament times. Golan was another chief city of East Manasseh, as it was identified as a City of Refuge for the manslayer.

The tribe of Manasseh, as previously stated, also inherited the land of Gilead. Many famous Old Testament exploits took place in Gilead, and by the hands of Gileadites. These were mighty people, and produced some of Israel's most heroic men. Men such as Jephthah, Saul, Elijah and David are connected to Gilead and spent significant amounts of time in the land east of the Jordan. David fled Jerusalem to Gilead during the rebellion of his son Absalom.

Posted by Juicing and Raw Foods Sunboy at 12:28 PM
Email ThisBlogThis!Share to TwitterShare to FacebookShare to Pinterest
Labels: Caleb, DUMBS in the days of Moses, Joshua, The Tribe of Manasseh
Older Posts Home
Subscribe to: Posts (Atom)