The Holy Way: Meaning of the feasts of YHVH

29The next day John seeth Jesus coming unto him, and saith, Behold the Lamb of God, which taketh away the sin of the world. 30This is he of whom I said, After me cometh a man which is preferred before me: for he was before me. 31And I knew him not: but that he should be made manifest to Israel, therefore am I come baptizing with water. 32And John bare record, saying, I saw the Spirit descending from heaven like a dove, and it abode upon him. 33And I knew him not: but he that sent me to baptize with water, the same said unto me, Upon whom thou shalt see the Spirit descending, and remaining on him, the same is he which baptizeth with the Holy Ghost. 34And I saw, and bare record that this is the Son of God. 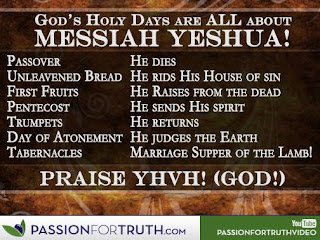 11 These things happened to them to serve as an example, and they were written down to instruct us, on whom the ends of the ages have come.

(click pic to enlarge)
FIRST DAY OF THE WEEK  OR FIRST OF THE SABBATHS?

We are now in the season of "counting the omer" leading up to Pentecost. Without an understanding of the Feasts (specifically the counting of the omer), people have no clue what "first day of the week" means in their Bible. Someone jacked with the text - big time! Take Acts 20:7 for instance:

7 And upon the first day of the week, when the disciples came together to break bread, Paul preached unto them, ready to depart on the morrow; and continued his speech until midnight.

Note: the word "day" is NOT in the text. It is inserted either by ignorant translators or by those with an agenda (I suspect the latter). And the word "week" is a BOGUS translation for "sabbaton". Over and over and over again, "sabbaton" is the word for SABBATH and never for "week" in (normal) Greek. For more on that, see:http://www.babylonrisingblog.com/sabbaton.html

Matthew 28:1 In the end of the [weekly] sabbath, as it began to dawn toward the first day of the week, came Mary Magdalene and the other Mary to see the sepulchre. (KJV)

While it is true that the "first day of the week" follows the Sabbath, we can find a far better and MUCH more accurate translation of that particular Scripture in the Jubilee Bible:

Matthew 28:1 Now well along on the sabbath, as it began to dawn on the first of the sabbaths, came Mary Magdalene and the other Mary to see the sepulchre.

He rose after the last of the Sabbaths that precede the specific counting of seven Sabbaths leading up to Pentecost.

Acts 20:
6 And we sailed away from Philippi after the days of unleavened bread, and came unto them to Troas in five days; where we abode seven days.
7 And upon the first day of the week, when the disciples came together to break bread, Paul preached unto them, ready to depart on the morrow; and continued his speech until midnight. (KJV)

Here we see that they concluded the Feast of Unleavened Bread and in less than a week, they arrived in Troas, apparently in time to celebrate the first of the seven Sabbaths (that are COUNTED) leading up to Pentecost.

Again, the Jubilee Bible blows KJV out of the water with a far more accurate rendition of the Greek:

Acts 20:
6 And we sailed away from Philippi after the days of unleavened bread and came unto them to Troas in five days, where we abode seven days.
7 And the first of the sabbaths, when the disciples came together to break bread, Paul preached unto them, ready to depart the next day, and continued his word until midnight.

Look, I'm still searching this stuff out myself guys. And as I continue to do so, I become more and more convinced that YHWH has NOT changed His mind about His commandments, including the Sabbath, which we are told to REMEMBER - not forget, diss and/or change.

Ecclesiastes 12:13
Let us hear the conclusion of the whole matter: Fear God, and keep his commandments: for this is the whole duty of man.

Here is the patience of the saints: here are they that keep the commandments of God, and the faith of Jesus.

I'm thinking this stuff is going to become more and more important for us in these Last Days.

Malachi 4
4 Remember ye the law of Moses my servant, which I commanded unto him in Horeb for all Israel, with the statutes and judgments.
5 Behold, I will send you Elijah the prophet before the coming of the great and dreadful day of the Lord:
6 And he shall turn the heart of the fathers to the children, and the heart of the children to their fathers, lest I come and smite the earth with a curse.

Matthew 24:12
And because iniquity shall abound, the love of many shall wax cold.

Iniquity is sin. Sin is lawlessness:

1 John 3:
4 Whosoever committeth sin transgresseth also the law: for sin is the transgression of the law.

All who advocate for dissing the law are thus advocating for sin.

Matthew 7:
22 Many will say to me in that day, Lord, Lord, have we not prophesied in thy name? and in thy name have cast out devils? and in thy name done many wonderful works?
23 And then will I profess unto them, I never knew you: depart from me, ye that workiniquity [lawLESSness].

That's about as clear as it gets. I don't know about you, but I most certainly do NOT want to ever hear those words directed at me.


20But now is Christ risen from the dead, [and] become the firstfruits of them that slept. 21For since by man [came] death, by man [came] also the resurrection of the dead. 22For as in Adam all die, even so in Christ shall all be made alive. 23But every man in his own order: Christ the firstfruits; afterward they that are Christ's at his coming. 24Then [cometh] the end, when he shall have delivered up the kingdom to God, even the Father; when he shall have put down all rule and all authority and power. 25For he must reign, till he hath put all enemies under his feet. 26The last enemy [that] shall be destroyed [is] death. 27For he hath put all things under his feet. But when he saith all things are put under [him, it is] manifest that he is excepted, which did put all things under him. 28And when all things shall be subdued unto him, then shall the Son also himself be subject unto him that put all things under him, that God may be all in all.

Posted by Juicing and Raw Foods Sunboy at 9:50 AM
Email ThisBlogThis!Share to TwitterShare to FacebookShare to Pinterest
Labels: Meaning of the feasts of YHVH
Older Posts Home
Subscribe to: Posts (Atom)