In Russia, in the Kaluga region, a replica of the Tower of Babel was burned 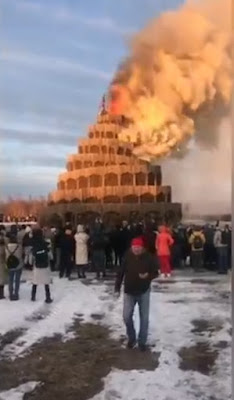 A great signal to the Edomites that Russia has turned a corner AWAY from your satanic, baby murdering ways of adrenochrome and as a country, has returned to Christ and our Father. The Tower of Babel is mankind's attempt to build a structure that would get them near the dome so they could attack and kill YHVH and replace him with Lucifer.

It was mankind's first attempt to challenge God and take His place. It was Adonai (YHVH) Himself who destroyed the tower. The fact that Russia has just now decided to burn a replica his predecessors built for their allegiance to darkness sends a clear message to the globohomo powers arrayed against that country.

We don't want your sick evil nonsense any more. Enough.

The Tower of Babel has a clear symbolic meaning. Russia is telling the devils of the Kabbalah/Talmud that their "dream" of building a one world government and wiping out Christian Russia from players on the inside is OVER. Russia is letting the whole world know that the New World Order has no place in their society.

What a wonderful sign in this season of evil.

Oh, to see that in the United States....

In America, we tear down crosses and burn churches while putting up baphomet statues at state houses, among other official horrors.

Posted by Juicing and Raw Foods Sunboy at 10:28 PM
Email ThisBlogThis!Share to TwitterShare to FacebookShare to Pinterest
Labels: a replica of the Tower of Babel was burned, In Russia, in the Kaluga region
Older Posts Home
Subscribe to: Posts (Atom)