Nephilim actors from the beginning

1949 Queen of Spades, about a deal with the devil. Full cast of the reptiles. As he turns to face the camera, he blinks madly to shift into human.

Posted by Juicing and Raw Foods Sunboy at 9:17 PM
Email ThisBlogThis!Share to TwitterShare to FacebookShare to Pinterest
Labels: 1949 Queen of Spades, and all manner of nephilim

The Tongue of the Damned 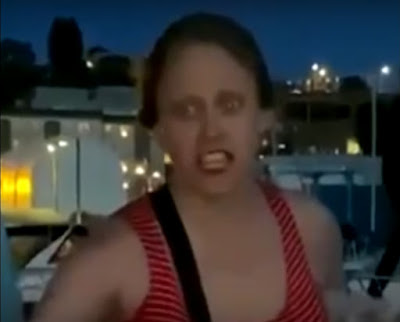 Posted by Juicing and Raw Foods Sunboy at 5:48 PM
Email ThisBlogThis!Share to TwitterShare to FacebookShare to Pinterest
Labels: and all manner of nephilim, The Tongue of the Damned

the tongue and demons, reptiles, and all manner of nephilim

If you feel there is something wrong with sticking out the tongue, you are discerning the spirit behind it.

In fact if you have an inkling that it is wrong, the truth is you know why it is wrong, you just haven’t put the disparate pieces together or put your finger on it. That is why the scriptures tell us to meditate on His Word/ think on His Word, then the Holy Spirit will open up the dark places as though they were light.

I hope this helps.

Here the Lion and the Unicorn both stick out their tongue.

Now it is clear that the sticking out of the tongue even looking at English culture and not the Bible is one that declares disrespect, disobedience and rebellion.

But we see this very clearly when examining Isaiah 57:4

“Against whom do ye sport yourselves? against whom make ye a wide mouth, and draw out the tongue? are ye not children of transgression, a seed of falsehood,”

The seed of falsehood is a reference to the Cain bloodline from Satan, who bedded (beguiled) Eve and she bore twins; one son from Adam, the other from Satan. There are two bloodlines on this world. The Adamic, of which Yeshua and the prophets and the rest of us came through and the Satanic or Canaanite, of which the nephilim, hybrids, and blue bloods come from.

To Draw out is arak in Hebrew meaning to lengthen out.

This picture shows us clearly

If you've got a wife or girlfriend who does this and as a regular feature of her character, then...you probably should be taking a closer look at her and your life.

Matthew Poole writes in his commentary on this passage of scripture

“Make a wide mouth, and draw out the tongue: these are the known and common gestures of mockers, of which see Job xvi. 10 ; Psal. Xxii. 7 ; XXXV. 21. Are ye not children of transgression, a seed of falsehood of either an adulterous brood, as was said before; or a generation of liars, whose practices grossly contradict your principles and professions, who deal deceitfully and perfidiously both with God and with men.” pg 456

When they were reproved for their sins, and threatened with the judgments of God, they ridiculed the word of God with the rudest and most indecent gestures and expressions of disdain. They sported themselves, and made themselves merry, with that which should have made them serious, and under which they should have humbled themselves.

They made wry mouths at the prophets, and drew out the tongue, contrary to all the laws of good breeding; nor did they treat God’s prophets with the common civility with which they would have treated a gentleman’s servant that had been sent to them on an errand. 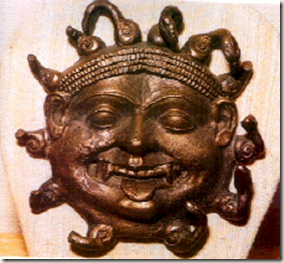 This is an ancient mask of Medusa. The tongue is out, fangs, and an endless array of hitch hikers infested in her head. I'm sure the eyes are black too, for the sculpture didn't add iris to the eyes. She has other names

And all that beauty? Seems real enough; there it is in a picture or movie. Here's a test you can do for yourself. Go back 60 or 70 years and look upon some of the so called good looking movie stars of those days.

To you and me, yeah, okay, I can see what they mean. To us, nothing special, many even seem plain.

In those days, say 1920s through the 60s, these men and women were literally fawned over by the people of the time. I've met women, many years ago, said they carried a secret crush for Cary Grant, Rock Hudson, Clark Gable. And the big women stars from that time, Betty Grable, Marlena Dietrich, and so on. Like mezmerizing power of men and women.

Today, that power is gone. We can hardly imagine someone actually swooning and fainting in the presence of these stars. We shake our head and wonder what all the fuss was about. See, they are dead. Their magic is no more. The demons that served them haved moved on and their own level of nephilim power exists no more. So, they no longer bring that out in people.

This is the true meaning of STAR POWER, when you hear it said amongst celebrities. The Power they speak of is of Lucifer.

The same holds true for now, as then.

It just doesn't work on people who are free from that kind of slavery. Another of the wonderful gifts of being with Christ.

Posted by Juicing and Raw Foods Sunboy at 11:00 PM
Email ThisBlogThis!Share to TwitterShare to FacebookShare to Pinterest
Labels: and all manner of nephilim, reptiles, the tongue and demons
Older Posts Home
Subscribe to: Posts (Atom)