From Turkey; discovered in a Jew's car, trying to get across the border. Notice, they have to keep this grimiore in a dybbuk box (demon box) to contain the dark spirits attached to this unholy text. The scroll is human skin, as required by Hasidic law. They contain key passages from the Kabbala.

Dybbuk in reverse is phonetically, COVID.

A grimoire (/ɡrɪmˈwɑːr/ grim-WAHR) (also known as a "book of spells" or a "spell book") is a textbook of magic, typically including instructions on how to create magical objects like talismans and amulets, how to perform magical spells, charms and divination, and how to summon or invoke supernatural entities

These are ancient books of shadows. Often going back to the era of Christ and earlier. These kind of horrific books have overseen the countless slaughter of hundreds of thousands, over thousands of years. The witch or rabbi losing these will have his or her life taken from them, for allowing this to happen.

These will no doubt be returned to their satanic masters. 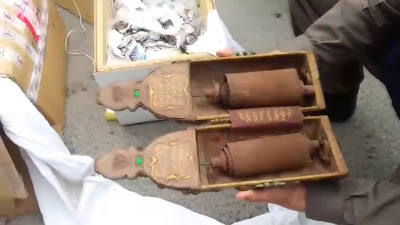 In 1976, when I was a young lad, I went to someone's house giving instruction on the Bhagavad Gita. He had dozens of such scrolls and explained what each were, what they did. He was also gay.

It was quite an education. I didn't understand it at the time, for as I told him, I was only interested in the HIGHWAY TO CHRIST. This annoyed him to no end, belittling Yeshua by saying he was "just another master of wisdom."

He died alone and horribly, him and his precious scrolls. I found out later, the whole kit and caboodle was donated to the Aquarian Education Group, in Agoura. Another satanic outfit I discovered. Even in those days.

I've been on this road a very long time. Very long. Seems like forever.