Lilith, consort of the Wicked One

Lilith, consort of the Wicked One

DB with excerpts from an old file from 2004; author unknown

This entity, whom the Holy Word describes as the whore of Babylon, is the most wicked of evil spirits. Her various incarnations were as Jezebel, Helena of Troy, Cleopatra, Semiramis, Diana, Astarte, among many others. Among modern witches, they believe that the Hildebeast (HRC) was her latest incarnation. Demonic vessels have confirmed this as well. As much as we can trust anything from these kinds, which is not at all.

However, this demonic time spirit's existence has been well established, especially by those involved in REAL deliverance ministry (not that tripe you see the fakers do on TV). In point of fact, it is lilith that empowers phreaks (trans).

Of course corrupted bible preachers who are in fact, nephilim, who pray upon Christians of all types, teach that the whore of Babylon isn't a spirit, but a metaphor for corruption. This is clearly incorrect. Everything in existence exists because there is a conscious spirit behind the form. Lilith is the patron goddess of lesbians. They even name their gatherings, Lilith festivals.

Lilith’s origins are recorded from ancient Sumerian beliefs of night spirits that preyed upon humans while they were sleeping. Of the four classes, Lilith probably most resembles the Ardat Lili. whom seduce men at night and steal their sperm to procreate demonic children. Some scholars relate Lilith with the Lilitu, winged night spirits that preyed specifically on women, women in childbirth, and their newborns.

Lilith’s name is also revealing of her characteristics. "Lil" means both "air", "breath", and "spirit" in Sumerian, most likely connoting that the substance of air was synonymous with the substance of spirits [2]. This relates the the original spelling of Liloth (LILOTh), translated to "the spirits" in Hebrew [3]. She is literally the Prince of the Air.

Lilith’s name has also be attributed to Kramer’s translation of the Epic of Gilgamesh (ki-sikil-lil-la-ke). Although, Kramer’s translation means "Lila’s maiden, beloved, companion, or maid," which implies that a demon or spiritual companion of "Lila" was in the tree. "Lila" means "night," and "mist," and is associated with night monsters. Lila’s maiden tore down the tree and fled into the wilderness. Lilitu, one of Lilith’s predecessors, is associated with desolate places. In later Biblical works, Lilith is predicted to "find a place of rest" in the ruins of desolation.

Lilith is also related to Lamashtu, whom Pazuzu made flee back to the Underworld. Lamashtu is a demi-Goddess of the Babylonians, known for strangling and drinking the blood of infants.

Lamashtu is described as "the Daughter of Heaven," which corresponds to Lilith’s creation directly from Lucifer.. She is described as having the head of a lion and her breasts being suckled by a puppy and a piglet (a chimera). She rides upon the back of a donkey to the Underworld, where the bow of the boat ends in a serpent’s head. The space between her legs is a scorpion, which corresponds to the astrological sign Scorpio – that to this day is called "the genitals" of the body of the Zodiac.

Another entity Lilith is related to is Lamia, whom attacked pregnant women, seducing men, and devouring internal organs. Lamia also shares the phenomena of "child killer" similar with Lilith – she killed human children because her own supernatural brood was murdered off. Lamia had a love affair with Zeus, and in jealousy Hera proceeded to murder her children. In retaliation, Lamia began to kidnap and murder human children.

Like Lilith, she was represented as a serpent from the waist down. Another source likens Lamia to an androgynous spirit that has a woman’s breasts and a man’s organ; similar to Lilith and Samael.

She touches the bellies of women in labor
She pulls out the pregnant women’s baby
The daughter of Heaven is one of the Gods, her brothers
With no child of her own.
Her head is a lion’s head
Her body is a donkey’s body
She roars like a lion
She constantly howls like a demon-dog.


When the Hebrews adopted these paths, the actual name "Lilith" or "Liloth," most likely dates back about 600 BCE during and after Hebrew captivity in Babylon. 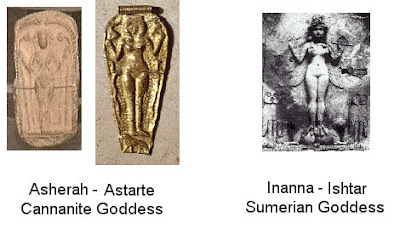 Hard physical evidence, such as a Hebrew incantation bowl (click below images) for protection dates back to only 600 CE, which dates Lilith back to at least three hundred years before the creation of the Ben Sira. 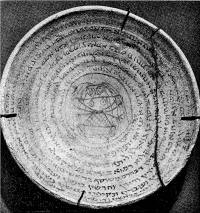 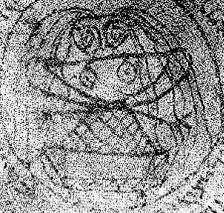 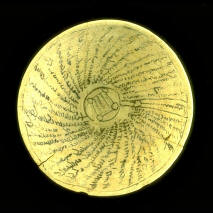 The Babylonian demon bowls unearthed in Iraq date only back to 600 to 800 CE at the earliest, and were used for "trapping" malevolent spirits or demons – which may have been used to conjure them on a desired victim. However, these bowls are also used in magick, to ward curses and manner of ill will from sorceries. Lilith is mentioned on at least two of them meant to exorcise her; clearly the people of the land of Shinar were well acquainted with this blasphemous entity and were dealing with it.

In the tradition of the Pharisees and Sanhedrin, it is made clear that Samael and Lilith were born as one, similar to the form of Adam and Eve who were also born as one, reflecting what is above. This is the account of Lilith which was received by the Sages in the Secret Knowledge of the Palaces.

The Matron Lilith is the mate of Samael. Both of them were born at the same hour in the image of Adam and Eve, intertwined in each other. Asmodeus the great king of the demons has as a mate the Lesser (younger) Lilith, daughter of the king whose name is Qafsefoni. The name of his mate is Mehetabel daughter of Matred, and their daughter is Lilith.

This is the exact text of what is written in The Chapters of the Lesser Palaces as we have received it, word for word and letter for letter. And the scholars of this wisdom possess a very profound tradition from the ancients. They found it stated in those Chapters that Samael, the great prince of them all, grew exceedingly jealous of Asmodeus the king of the demons because of this Lilith who is called Lilith the Maiden (the young).

She is in the form of a beautiful woman from her head to her waist. But from the waist down she is burning fire--like mother like daughter. She is called Mehetabel daughter of Matred, and the meaning is something immersed (mabu tabal). The meaning here is that her intentions are never for the good. She only seeks to incite wars and various demons of war and the war between Daughter Lilith and Matron Lilith.

They say that from Asmodeus and his mate Lilith a great prince was born in heaven. He is the ruler of eighty thousand destructive demons and is called "the sword of king Asmodeus." His name is Alefpene’ash and His face burns like a raging fire (’esh). He is also called Gurigur, for he antagonizes and struggles with the prince of Judah, who is called Gur Aryeh Yehudah (Lion-cub of Judah). From the same form that gave birth to this war-demon another prince, a prince whose root is in Kingdom, was born in heaven.

You already know that evil Samael and wicked Lilith are like a sexual pair who, by means of an intermediary, receive an evil and wicked emanation from one and emanate to the other. I shall explain this relying on the esoteric meaning in the verse,

"In that day the Lord will punish with His great, cruel, mighty sword Leviathan the twisted serpent and Leviathan the tortuous serpent"--this is Lilith--"and He will slay the dragon of the sea"

As there is a pure Leviathan in the sea and it is called a serpent, so there is a great defiled serpent in the sea in the literal sense. The same holds true above in a hidden way. The heavenly serpent is a blind prince, the image of an intermediary between Samael and Lilith. Its name is Tanin’iver

There is a great deal of her brand of evil present in the world and they nephys absolutely seek out her energy in ritual and in body totems, to harness her sexual power in the seduction of other men and women. If you see a woman with a belly button jewel (over the womb and and Fallopian tubes), it is Lilith's sexual enticements that are coming from them. Weak souled, corrupted men and women often find such women difficult to resist; that's how powerful a dark energy she channels to her adherents.

Learning about the enemy is important to the degree that once we understand these demonics and how they operate, we can therefore more easily understand those under their influence and help free them from these vicious and most terrible of entities. So many people see things in, on, and around others and just think it's just a fashion thing or a tattoo brand they are keen about. No harm, right?

This is incorrect. In their pedantic ways, coven members stitch by nose piercings, belly button jewels, ear piercings that they are in fact, WITCHES. These are nephilim hybrids, mostly, who seek out to corrupt in plain sight, those in whom they come into contact. Once you learn these modalities you can also learn to protect yourself and BE NOT DECEIVED.

It's the blind deception that allows for so very many to fall into one trap after another, never realizing how their VERY OWN BLINDNESS made them easy prey for the dark siders.

The purpose of articles like this one is not to engage nor encourage others to seek out dark spirits or anything related to it or them. On the contrary. We are in a spiritual war; a multi level battlefield. We are not just fighting an idea (evil), but actual entities with varying degrees of blasphemies and powers that are behind the people, places, and events that are creating outcomes in our world.

To this end, I teach to reveal these realities to those in whom are ready and able to battle upon this field. As Ephesians teaches us, we must put on the whole amour of Yahua and with His Truth, defeat them.

Those who are or have been in deliverance ministry (I've not done that many; about 20 or so. But I've evicted from people and places, countless thousands from little demonic slugs to 4 distinct battles with Lucifer himself.) This is not bragging; rather, it reveals my limited experience in these matters, but I've since 1986, had this work put upon me, not of my choosing. That's another story for another day, and frankly, who cares.

Posted by Juicing and Raw Foods Sunboy at 10:17 PM
Email ThisBlogThis!Share to TwitterShare to FacebookShare to Pinterest
Labels: consort of the Wicked One, Lilith
Older Posts Home
Subscribe to: Posts (Atom)