I was thinking about the evil people constantly exhorting us into one evil enterprise after another. I see things in video others cannot see. This happens daily and I have tested this. For example there was a video recently of a woman being pushed by a demonic. I could clearly see the shadow walker emerge from the wall moves towards her, extend a vaporish arm and push the woman. Yet, the reviewer was speculating in the clip on what could have pushed her? The people in the comments section were all speculating...she must have tripped...or whatever.

Surely, there must be some sign beyond shouting from the gate that reveals what these people are? And Dad led me to this passage and the roof fell in.

12A naughty person, a wicked man, walketh with a froward mouth.

14Frowardness is in his heart, he deviseth mischief continually; he soweth discord.

When we look at the evil people leading this country into ruin, they nearly all have one common feature. THEY TALK WITH THEIR HANDS.

Gates, the evil Bond villain, can't get a word out without those snake like appendages of his going all over the place in front of him. They all do it, especially when they are ADVISING to do evil. Every single time. 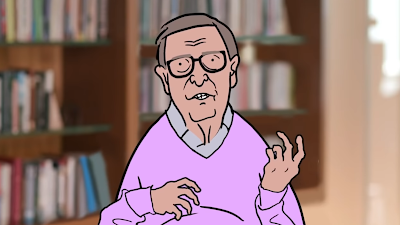 Posted by Juicing and Raw Foods Sunboy at 7:00 AM
Email ThisBlogThis!Share to TwitterShare to FacebookShare to Pinterest
Labels: evil teaches with its fingers
Older Posts Home
Subscribe to: Posts (Atom)