The entire Satanic kingdoms are a matriarchal society where the females are the real rulers, hence the hive mind and Queen bee. Most of their ruling class is hidden, in other words. The Queen of England bows down to Hepsebah. There are six separate kingdoms on Earth, three kings of patriarchal societies; and three Queens of Matriarchal societies. Hepsebah’s group is called, “The Mothers of Darkness” and they are a powerful ruling class of their own. Hillary Clinton (Jezebel spirit) was a Mother of darkness.

What is called Satanism is the ruling hierarchy of the ancient brotherhood pyramid under the command of demons. Like all the other parts of the network, it is strictly compartmentalized, the highest levels of the Satanic network lock into the highest levels of the brotherhood, but the lower degrees are not allowed to know the true nature of the organisations they are involved in. Some of the levels of Satanism are known as the Sisters of Light, the Five Star Generals, Master Counsellors, Keeper of the Books, Keeper of the Seals, and there is one position called an Asmodeus.”
Ceremonies are performed to the Satanic ‘goddess’ known as Lilith who is a demon in the Hebrew Cabala. In ancient Sumer the demonic bloodline is passed on through the female and was symbolised as a lily. The main demonic/reptilian gene carriers were given names like Lilith, Lill, Lilutu, Lillian and Lillette. Another demon used by some ‘Mothers’ is called Bilair, Bilar, and Bilid, cabalistic names for the force others call Satan. It is from these areas in Belgium and northern France that the bloodline families came, including the Bruces, to take over Scotland all those centuries ago. Belgium is a little country between France and the Netherlands and is the home of the European Union, NATO, and, I am told, a massive computer center where databases on all the people of the world are being compiled. It is known as ‘the Beast’ and there are a number of these around the world. An Elite mind control operation called the Janus Group is also based in the NATO headquarters. Nimrod was Eannus, the god with two faces who was later known to the Romans as Janus. And once again we return to Babylon. Lilith is the demoness who takes the form of an owl and it appears to be no coincidence that a giant owl is the statue being worshipped by the global leaders in the “Bohemian Grove” cremation of care ceremony every year. Christians know only from their version of the Old Testament Bible that Eve was the first woman created from Adam’s rib [Gen 2.21-24]. There is Jewish legend found in rabbinic literature that the first woman was Lilith who out of pride, stubbornness and a rebellious nature abandoned Adam at which point she was transformed into a demon. She is the “terror that flies by night” in Psalm 91. The Legends of the Jews- The Alphabet of Ben Sira (10th century) Lilith refused to lie below when they were having sex. This refusal, however, is not found in the Haggada. Speaking God’s name, she grew wings and flew away to the Red Sea. In the desert, she had spawned a hundred demons. Adam complained to God that his wife had abandoned him and now he was alone. God commanded angels to bring Lilith back to Adam. The angels tried to force her to return to Adam or she would lose her children. Lilith adamantly refused to live with Adam. She took her revenge by killing human babies; boys when they are only a day old, while girls up to 20 days old. The only way to ward her off was to adorn each baby with an amulet with the names of three angels; the same three angels who had confronted Lilith. So, God created another woman for Adam – Eve. Like in Genesis, God created her from Adam’s rib. (the above passage is spurious at best; Lilith is simply the jezebel spirit in whatever form it resides. It's the feminine aspect of evil.DB)
http://www.sacred-texts.com/jud/loj/index.htm
Remember that Demons go where they are invited so when these codes, names, symbols and rituals are used they are evoking these evil gods to enter their space for various reasons. Tribal leaders would evoke these evil entities before going into battle for protection. Skulls and body parts of powerful well-known ancient people would be used for the same reason. The spear used to pierce the side of Yahshua was a BIG TICKET ITEM sought by well known groups like the Templars. The ancient Judahites carried the Ark of the Covenant into battle against the enemy. When the Bushes use these coded words regarding Iraq, they are aware that America will be entering the territory of Nimrod who was the ruling god of Babylon. This is not about what you see with your eyes, this is about spiritual power and energies that they are using that feed these demon spirits and increase their power.
As you can see their reach is vast. The Illuminati, ruling elite, whatever you call them are still just men. The big difference is that they are ruled by demons. They have sold their souls for an Earthly Kingdom which they are fighting to keep. They believe the lies that Satan has whispered to them, that they can be rich, rule the land, have great power, become immortal and be LIKE gods. Satan fulfills part of the promise. He gives them riches beyond their wildest dreams, they rule the lands and everything in it, their power is all consuming…by all this they are hooked. But they are NOT nor will they ever be immortal and they are NOT and will NEVER BE like gods. The truth here is that they have had their reward. Its over for them. What awaits them is hell and lots of angry demons that will be locked up with them for all eternity. While those who do not serve Yeshua are in bondage to them now, if they change their hearts in the end they will bless their poorness, their humility, their humble lifestyles when Yeshua returns for what is and always was rightfully His. Even the elite still have this opportunity open to them but the door is closing and soon what we each have chosen will be our lot for eternity.
Europeans are the lost tribes of Israel over which the elite now have control by Satanic doctrines and spells, the bondage that Yahweh put Israel into for consistently worshiping false gods. Each tribe = a country. Mannaseh = America, Dan = the Danish countries and so forth. Satan has been very busy covering our past and confusing our heritage. These forces will be led by Gog (a demon spirit) to attack (true) Israel which are Europeans. The lost tribes of Israel are not black or mongrels (mixed) but white Europeans, Caucasians which crossed the Caucaus mountains.
Posted by Juicing and Raw Foods Sunboy at 10:24 AM
Email ThisBlogThis!Share to TwitterShare to FacebookShare to Pinterest
Labels: Asmodeus, Grand Lodge Of Druids, Hepsebah, hillary, Jezebel spirit

The Zucktron is NOT human - Thomas UN - the Hildebeast

When o when will the people learn about REALITY?

His CIA code name is OVERLORD. 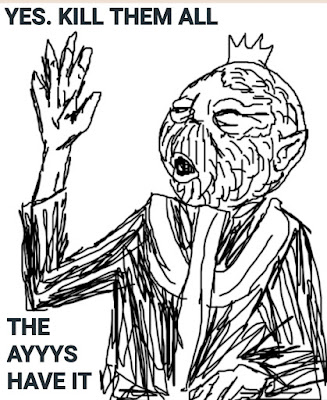 Posted by Juicing and Raw Foods Sunboy at 8:39 AM
Email ThisBlogThis!Share to TwitterShare to FacebookShare to Pinterest
Labels: hildebeast, hillary, OVERLORD, US Linda Thomas at UN yesterday, Zucktron is NOT human
Older Posts Home
Subscribe to: Posts (Atom)