I was just out having sukkot double buggles with Dad and these were the verses he led me to for...whomever can hear it. 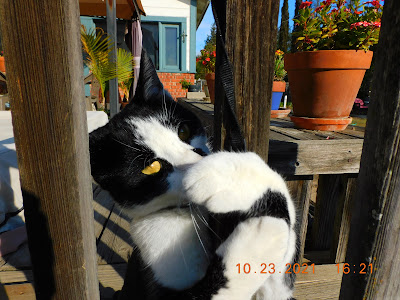 1Verily, verily, I say unto you, He that entereth not by the door into the sheepfold, but climbeth up some other way, the same is a thief and a robber.

2But he that entereth in by the door is the shepherd of the sheep.

3To him the porter openeth; and the sheep hear his voice: and he calleth his own sheep by name, and leadeth them out.

4And when he putteth forth his own sheep, he goeth before them, and the sheep follow him: for they know his voice.

5And a stranger will they not follow, but will flee from him: for they know not the voice of strangers.

19And he said, Behold, I will make thee know what shall be in the last end of the indignation: for at the time appointed the end shall be.

20The ram which thou sawest having two horns are the kings of Media and Persia.

21And the rough goat is the king of Grecia: and the great horn that is between his eyes is the first king.

22Now that being broken, whereas four stood up for it, four kingdoms shall stand up out of the nation, but not in his power.

23And in the latter time of their kingdom, when the transgressors are come to the full, a king of fierce countenance, and understanding dark sentences, shall stand up.

25And through his policy also he shall cause craft to prosper in his hand; and he shall magnify himself in his heart, and by peace shall destroy many: he shall also stand up against the Prince of princes; but he shall be broken without hand.

36Then Yeshua (Jesus) sent the multitude away, and went into the house: and his disciples came unto him, saying, Declare unto us the parable of the tares of the field.

37He answered and said unto them, He that soweth the good seed is the Son of man;

39The enemy that sowed them is the devil; the harvest is the end of the world; and the reapers are the angels.

40As therefore the tares are gathered and burned in the fire; so shall it be in the end of this world.

41The Son of man shall send forth his angels, and they shall gather out of his kingdom all things that offend, and them which do iniquity;

42And shall cast them into a furnace of fire: there shall be wailing and gnashing of teeth.

43Then shall the righteous shine forth as the sun in the kingdom of their Father. Who hath ears to hear, let him hear.